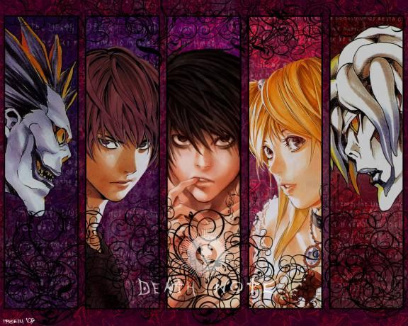 ~As Kurai begins to walk along the park she watches the kids run around,~
"I wish I was still a kid."
"Why?"
"Because back then you do not have to pay taxes."
~He then laughs pointing at her as she slaps his hand away walking a little further & then sitting on a park bench pulling out a large box of vanilla pocky~
"You allways eat that stuff but you never get any bigger!!"
"I know."
"Why?"
"I do not know. Ask science."
~He then grumbles lightly takeing a seat next to her sloutching as he does so~
"Tell me all the rules of the deathnote."
"I have allready told you half."
"Well tell me again. I forgot."
"Fine,
How to use l:
This note shall become property of the human world, one it touches the ground (Arrives in) the human world. The owner of the note can reconize the image of the original owner, I.E a god of death. The human who uses this note can neither go to heven or hell.
How to use ll:
If the time of death is written within 40 seconds after writeing the cause of death as a heart attack, the time can be manipulated, & the time can go into effect within 40 seconds after writeing the name. The human who touches the deathnote can reconise the image of it's original owner, a god of death, even if the human is not the owner of the note.
How to use lll:
The person in possetion of the death note is possessed by a god of death, it's original owner untill they die. If a human uses the note, a god of death usually appears in front of him/her after he/she uses th note (It's more fun that way XD) Gods of death, the original owner of the note do not do, in principle, anything which will help or prevent the deaths in the note. A god of death has no obligation to completly explain how to use the note or rules which apply to the human who owns it."
~he then looks to Kurai continueing,~
"That's why I cannot continue,"
~She slaps him upside the head biteing off some pocky~
"Continue."
"Fine...
How to use lV: A god of death can extend his/her life by putting human names in the note. But humans cannot. A person can shorten his or her own life by useing the note. The human who becomes the owner of the death note can, in exchange of half of his/her remaining life, get the sight of a god of death which will enable his/her to see a human's name and remaining lifetime when looking at the human's face. A god of death cannot be killed even if stabbed in the heart with a knife or shot in the head with a gun. However, there are ways to kill a god of death that are not generally known to the gods of death,"
~Kurai then shakes the empty box of what was in it pocky concludeing that it was empty as she gets up silently then slowly walking to a small store leaveing Amonoko behind as he continues,~
"How to use V:
The conditions for death will not be relized unless it is physically possible for that human or it is reasonably assumed to be carried out by that human. The specific scope of the condiction for death is not known to the gods of death, eather. So you must examin it to find out yourself."
~He then looks up to where Kurai was sitting & jumps up looking for her as he sees her enter a convenient store~
"Hey!!!! Why did you leave?! Oh... Your So mean!!!!"
~His black wings then extend from his back as he makes his way towards her~